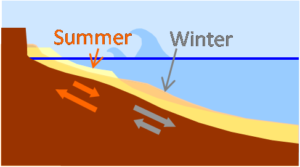 Working with Ole Madsen at MIT, my doctoral research focused on the prediction of cross-shore sediment transport in the nearshore region, a key problem in coastal engineering to understand beach profile evolution. I combined analytical and numerical modeling of the turbulent boundary layer under nearshore waves. By means of an assumption about the turbulence structure, I obtained an analytical characterization of the wave-current turbulent boundary layer hydrodynamics, which I used to successfully predict sediment transport due to nearshore waves and currents. In this study I also characterized key differences between the boundary-layer hydrodynamics of oscillating water tunnels (a laboratory facility commonly used in coastal engineering) and those of real sea waves. I showed that such hydrodynamic differences have a significant effect on the resulting sediment transport, an important result to be accounted for when extrapolating experimental measurements from oscillating water tunnels to field conditions.