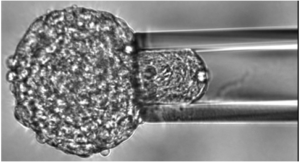 Aggregate shivering. During my postdoctoral stay at Institut Curie, working with Françoise Brochard-Wyart, I started studying the mechanical characterization of multicellular structures (such as a tissue or a tumor) in the presence of strong forces or flows. At Institut Curie we used spheroidal cellular aggregates as an in vitro model of a tissue. With Karine Guevorkian and others, we identified and described a collective contractile cell response to force, which we called aggregate shivering. 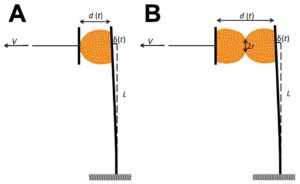 Detachment and fracture of cellular aggregates. During the master’s internship of Louise Bonnemay, we developed an assay to measure the detachment energy of an aggregate from a fibronectin-coated substrate (to mimic integrin-mediated cell-matrix adhesion) and the fracture between two-partially fused aggregates (to mimic cadherin-mediated intercellular adhesion). We experimentally demonstrated a dependence of the adhesion energy on the velocity of force application. We also developed a theoretical model showing an analogy between the fracture of soft tissues and that of polymers.